One of my favourite bands, like, ever; Radiohead, today announced the release of their new album via their Twitter and Facebook pages. The band posted a very short tweet: “Thank you for waiting… http://rhd.cc/jd19 #thekingoflimbs“.

As an Oxford boy myself and a huge fan I dashed to the website and purchased the album there and then. I was immediately intrigued to see how Radiohead were selling their record this time round. The band famously released their last record, In Rainbows (2007), via a ‘pay what you want’ download method before releasing the record in a tangible form through XL Recordings. This turned the music industry on its head and a number of high profile artists soon followed suit shortly afterwards.

Radiohead’s ‘The King of Limbs‘ record is being released via the following methods:

The album is available to buy on presale as a download (available from 19/02/11):

There is also an option for a Newspaper album (shipping date 09/05/11), which includes:

Prices for the Newspaper option are:

No one knows what the album will sound like. The band will announce the track listing in the next few days. If their latest Dead Air Space blog post is anything to go by, perhaps we are in for another surprise.

Radiohead today announced that they would be releasing ‘The King of Limbs’ one day earlier than originally planned (19/02/11), raising speculation between fans that perhaps there could be a second installment released tomorrow due to the relatively short length of this early release: 8 tracks; 40+mins. Radiohead are one for surprises, so we can be hopeful!

‘The King of Limbs’ Track Listing

YouTube is already filling up with versions of the tracks. Go check them out and then buy the record: http://www.thekingoflimbs.com/

This past week Radiohead released the physical version of their album ‘The King of Limbs’ in record stores worldwide with a special edition newspaper entitled “The Universal Sigh”. Take a look: 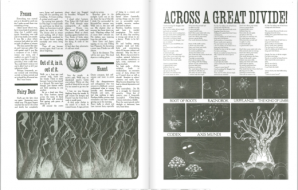 Meanwhile guitarist Jonny Greenwood told rock magazine Q, “We’re recording at the moment. We’re just playing and making music and trying to work out what to do, really. We’ve stopped planning ahead very far and we’re just making music and wondering where to go next and what to do.” – Exciting times for any Radiohead fan as they write and record LP #8!

12 Responses to New album: Radiohead ~ The King of Limbs